How I Learned to Love the Re-Org

All the best projects start with pen to paper. In 2016, the Santa Cruz Museum of Art and History, a Packard Foundation Local Grantmaking Program grantee, received an Organizational Effectiveness (OE) grant to support a reorganization of their staffing structure. Nina Simon, the museum’s executive director and author of her own highly engaging Museum 2.0 blog, provides her perspective on the value and challenges of this intensive project below. Many thanks, Nina, for sharing your wisdom and journey! 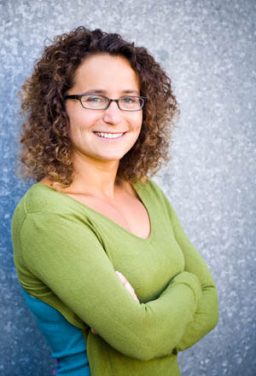 I sat at my kitchen table with a brown paper bag, timer by my side. I sliced the bag open and folded it into 12 rectangles, each about the size of an index card. I set the timer for five minutes and started working. In the first rectangle, I sketched out one version of how our organization could be structured. When the timer dinged, I reset it for five minutes, moved to the next rectangle and did it again. After an hour, I had 12 different versions of our staff structure, each in its own little box. Some were impractical. Some were poetic. But among them lay the seeds of our museum’s future.

By the time we applied for our first Organizational Effectiveness grant from the Packard Foundation in early 2016, it already felt late. The nonprofit I run, the Santa Cruz Museum of Art & History, had outgrown our grass roots. In five years, what was seven staff members when I arrived became 10, then 15, then 20 – and is now 27. When we had seven people, we barely needed an organizational chart. We were a scrappy band of creative folks trying to turn around a struggling organization. As we succeeded, we grew. But I resisted structure. I was wary of too much process. And so we stayed egalitarian and collaborative. It got chaotic. Almost everyone reported to me, and that caused frustration and bottlenecks all around. I was knee-deep in a capital expansion that would dramatically change our services, and I had less and less time for everyone. I knew that our smart, talented, wonderful staff could do more. I knew the capital expansion would mean new roles and functions. Our team deserved a new structure that sustained and empowered them.

I was scared. I had never heard anyone at any organization say, “that reorg sure was great!” They always seemed to bring even more confusion, frustration and pain than whatever had preceded them. I didn’t know whether or how we could do it well. I was also suspicious of consultants. Running a small, unorthodox nonprofit, I’d had bad experiences with consultants who didn’t seem to give us their full attention. They wanted to fit us into their boxes instead of helping us excel in ours.

My fears about consultants were allayed when I realized we had a consultant whom we trusted and really knew us, Keri Crask. Keri was like a hidden Jedi consultant. She was a retired HR executive and museum volunteer. She had volunteered to run management trainings for staff as we had started to grow, and she had become a trusted confidant to me and to some of my colleagues. At the time, she wasn’t consulting. But we realized that she could help us execute a reorganization, and she realized she wasn’t quite ready for full retirement. And so, with the blessing of our Board, Keri and I worked together on a proposal to the Packard Foundation for an OE grant.

Over the next six months, with OE support, we worked out a plan for a reorganization with two lead staff members, Stacey and Lis. I brought creative vision in the form of folded up pieces of paper with wild ideas on them. Keri brought structure and expert knowledge about how to coordinate the change. Stacey and Lis brought openness and honesty with regard to how their roles would change as they evolved into new director-level roles. And we all brought courage – lots of it.

I spent some time alone at my kitchen table at the beginning of the process, but quickly, planning the reorg became a team sport. At Keri’s urging, we first mapped out a new structure for the organization, one that could scale if we grew (which we did, almost immediately). We defined “buckets of work,” putting them in departmental groupings, noting the intersections. We shaped those buckets into jobs. We kept our eye on our core values and how to bake them into the departments, jobs, and interfaces among them. It was a full six weeks of work before we started talking about names of existing employees and tentatively slotting them into roles on the new chart.

Was the re-org perfect? Of course not. It was a challenging process that continues to surface from time to time with our staff. But it was better than I could have expected and ultimately made our organization stronger. In Keri, we had an expert guide who had rafted that whitewater before. She kept us going to the finish line, and she helped us grow as leaders and as an organization along the way. We could have done it without her, but we couldn’t have done it nearly as well nor learned as much in the process.